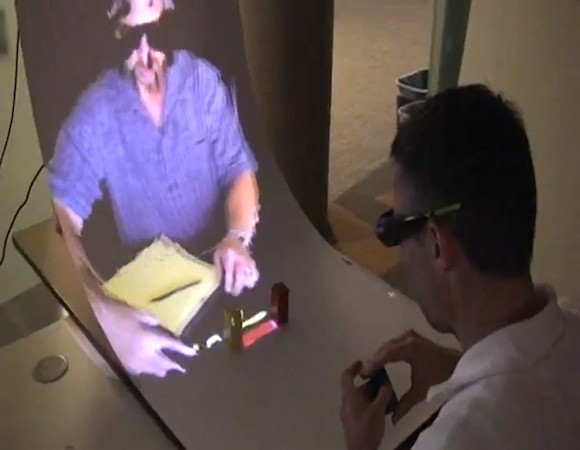 We got a look at a holographic telepresence project from Microsoft Research earlier this week, but that's far from the only Kinect-enhanced rig it's working on these days. This setup dubbed a MirageTable was also shown off at the Computer-Human Interaction conference in Austin, Texas this week, offering a glimpse of one possible future where two people can interact with virtual objects on a table as if they were sitting across from each other (or simply do so on their own). To make that happen, the setup relies on a ceiling-mounted 3D projector to display the images on a curved surface, while a Kinect on each end of the connection both captures the person's image and tracks their gaze to ensure images are displayed with the proper perspective. You can check it out in action after the break, although some of the effect is lost without 3D glasses.
Читать далее

The Carl Zeiss Cinemizer OLED has been a long time in the making -- we first heard about the video glasses at Macworld in 2008 -- but the company has yet to push the head-mounted display past the prototype phase. We stumbled upon Zeiss' booth here at CeBIT, where we found a version of the glasses that look mighty similar to the mock-up we saw in marketing materials from 2010, but are now equipped with a pair of head-tracking modules to expand the yet-to-be released marvel's practicality. With head-tracking now on board, the Cinemizer can theoretically appeal to gamers, architects, even educators, who can use the glasses in the classroom.
Читать далее
Регистрация | Забыли пароль?
Войти через: Vkontakte
В Вашем браузере отключен JavaScript. Для корректной работы сайта настоятельно рекомендуется его включить.