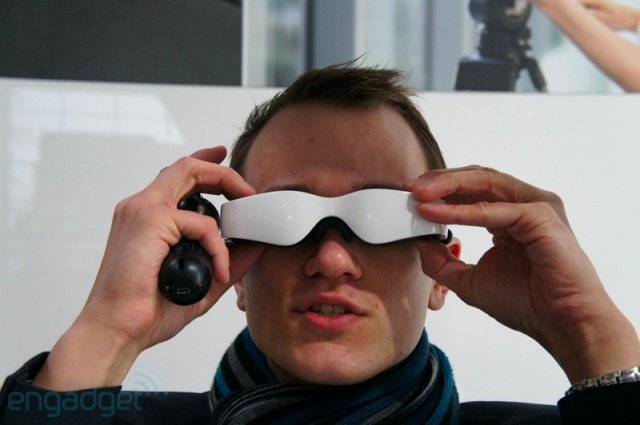 The Carl Zeiss Cinemizer OLED has been a long time in the making -- we first heard about the video glasses at Macworld in 2008 -- but the company has yet to push the head-mounted display past the prototype phase. We stumbled upon Zeiss' booth here at CeBIT, where we found a version of the glasses that look mighty similar to the mock-up we saw in marketing materials from 2010, but are now equipped with a pair of head-tracking modules to expand the yet-to-be released marvel's practicality. With head-tracking now on board, the Cinemizer can theoretically appeal to gamers, architects, even educators, who can use the glasses in the classroom.

We took a look at an Inreal CAD app demo that lets the wearer navigate a yet-unbuilt house, walking through virtual rooms (a joystick is used for forward motion, so you won't be accidentally walking into physical walls) as you judge paint colors, furniture placement and try to convince your significant other that there really is room for a 65-inch HDTV. The tracking modules are located behind the ear rests on each side of the OLED glasses, which have seen a slight boost in resolution since we last heard about them, jumping from VGA to 870 x 500 pixels in each OLED panel. Tracking was responsive and accurate -- the experience of walking around a room felt almost lifelike. What's even more exciting than the device's performance is that we may finally see these hit stores in 2012, with a tentative summer ship date. And, while still a pricey addition to your display collection, the Cinemizer lands on the inexpensive end of the Zeiss product scale, ringing up at €649 (about $850), plus another €100 for the tracking hardware. Jump past the break to see it in action.