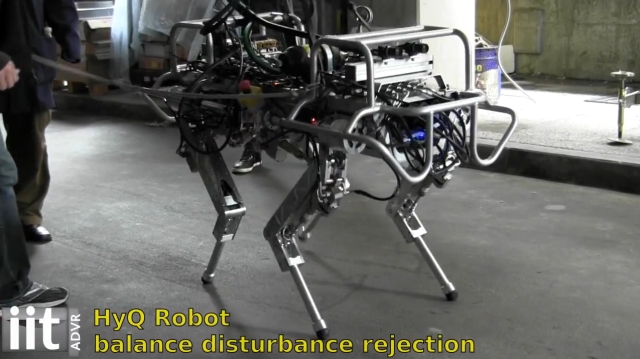 Last week, researchers from the Italian Institute of Technology took their quadruped robot HyQ for a test run outside the lab for the first time. The researchers were anxious to try some new tricks HyQ has learned, including the ability to trot over obstacles without falling. The robot is still a strange headless creature, and though a sensor head is in the works, this quadruped might get even weirder with a new hardware addition: arms. Yes, arms.

HyQ, built by a team from IIT’s Department of Advanced Robotics, in Genoa, is a hydraulic robot that relies on torque-controlled, actively compliant actuators. The goal of the project is to create an autonomous, versatile machine capable of running, jumping, and negotiating rough terrain that could find applications in search-and-rescue operations and exploratory missions.

The team, led by Professor Darwin Caldwell, will discuss recent improvements made to the robot's control system at the 2012 IEEE International Conference on Robotics and Automation, which happens this week in St. Paul, Minn.