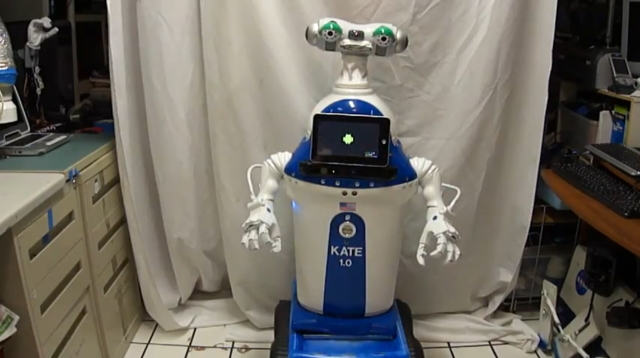 Dan Mathias is an American entrepreneur and roboticist who has single-handedly built a number of robots over the past few decades, including a pretty impressive full-size bipedal humanoid called ATOM-7XP. In just three months he has managed to build his own version of an edutainment robot called KATE (Kids Avatar Teacher and Entertainer). According to Dan, the idea was to build a bot that military servicemen and women could use to interact with loved ones when away from home, but could also find work as a teaching tool or entertainment robot.

Standing 114 cm (45 inches) tall and weighing 31.5 kg (70 lbs), KATE has a total of 22 degrees of freedom (head x7, 2 arms x2, 2 hands x4, torso x1, 2 wheels). The robot comes equipped with stereoscopic cameras and an Android tablet for teleconferencing, a Microsoft Kinect sensor for motion detection, ultrasonic sensors for range detection, and a nose that can detect carbon monoxide and other hazardous gases.

Technical wizardry aside, perhaps the best way to become acquainted with KATE is to watch the following video!