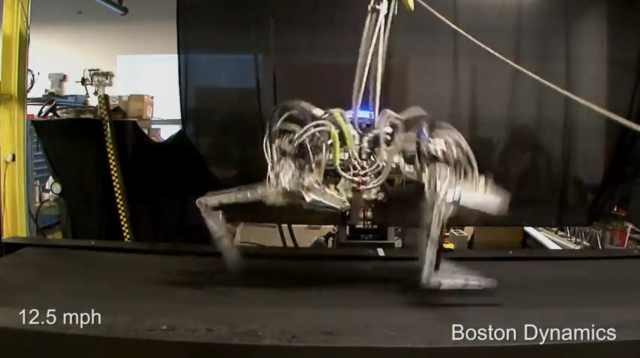 Boston Dynamics and DARPA have just released video of their prototype "Cheetah" robot galloping at 18 mph (nearly 30 kph), setting a new land speed record for legged robots. Boston Dynamics isn't calling this robot "Cheetah" just for fun: the bot's movements are all bio-inspired, patterned directly after fast-moving animals in nature like real cheetahs, horses, and even dogs. For example, you'll notice how the robot doesn't just rely on its legs, but also flexes its back with each stride, which is the same way that quadrupedal animals work.

The 18 mph test run shown in this video is definitely fast (probably faster than you), but it's not nearly fast enough, and Boston Dynamics is hoping to crank things up a notch in the coming months:

“While 18 mph is a good start, our goal is to get Cheetah running much faster and outdoors,” said Dr. Alfred Rizzi, technical lead for the Cheetah effort and Chief Robotics Scientist at Boston Dynamics. “We designed the treadmill to go over 50 mph, but we plan to get off the treadmill and into the field as soon as possible. We really want to understand the limits of what is possible for fast-moving robots.”

50 mph, for the record, is about 20 mph short of a real cheetah's maximum speed of about 70 mph. However, 50 mph is fast enough to catch a sprinting hare, and matches the speed of lions and gazelles, and the robotic Cheetah should have an endurance far surpassing any living animals.

So we've got a super fast Cheetah robot: what now? According to the press release, "the M3 program is basic research and not focused on specific military missions, fleet-footed robots such as the Cheetah could have a wide range of potential military applications." The press release goes on to suggest that Cheetah robots might be useful in emergency rescue and disaster response, although in our experience, that usually means that military applications are really the primary motivator for the design.

Cheetah is wired in to a bunch of equipment in this video (including off-board hydraulic power and a boom to keep in in the center of the treadmill), similarly to the way Boston Dynamics began testing their Alpha Dog prototype. From the sound of things, we won't have long to wait to see Cheetah running free: the company says that they'll have a "free-running version of the Cheetah that will run 'unplugged' in the field" sometime later this year.