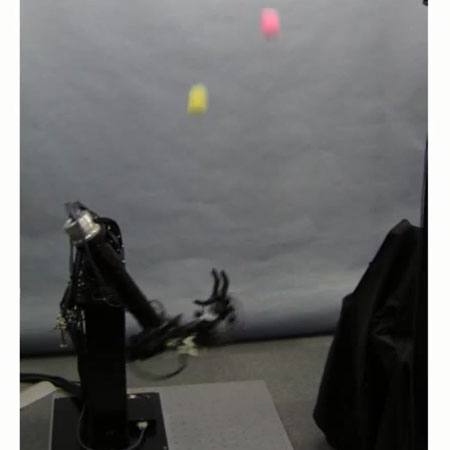 This high-speed hand and arm combination is coupled to an even higher speed vision system that allows the robot’s controller to plan for catches and throws (up to nearly 2 meters in height) at a leisurely 500 frames per second. The hand has three fingers with two or three degrees of freedom each, while the arm has seven more (although not all of them are being utilized). To be clear, the system isn’t just doing a repetitive motion that results in a series of actions that mimic a juggling behavior: the balls are being tracked through the air, and a series of throwing calculations are made for each and every cycle.

At this point, the hand can only reliably execute about five catches in a row before it loses a ball. This is primarily because there’s no operating shoulder joint: the robot is restricted to what’s essentially a two-dimensional vertical plane of operation, so anytime a ball drifts even a little bit sideways, the robot can’t get to it. Also, there’s still some throwing instability going on, which is what causes the ball to gradually wander in the first place. The researchers plan to conquer the latter with a new throwing motion, and then move on to other types of juggling.

If you’re wondering what the point of all this is (or why it qualifies as “research”) the roboticists put it like this:

“[Juggling] is one example of a skillful and dynamic human-like motion. We believe that there is much to be learned from the analysis of fast and repetitive throwing and catching actions, and the experimental results of this study will shed light on the nature of skillful and dynamic manipulations by humans.”

Two Ball Juggling with High-speed Hand-Arm and High-speed Vision System, by Takahiro Kizaki and Akio Namiki from the Graduate School of Engineering at Chiba University in Japan, was presented yesterday at ICRA 2012 in St. Paul, Minn.