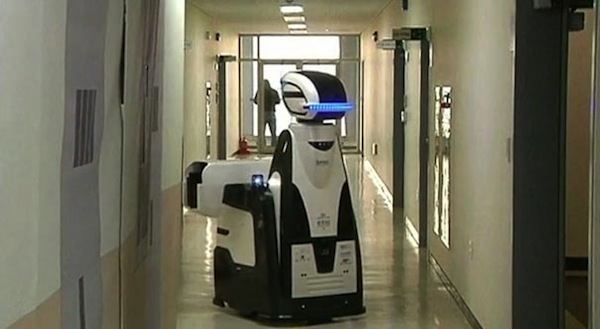 It sounds like the sequel that didn't even make it to DVD: RoboCop's jaded, rotund, less attractive younger brother, who never made the police force -- and tired of living in his sibling's shadow -- took a job as the next best thing: a prison guard. Well, that might not make the silver screen, but it's certainly reality TV. Meet Robo-guard, the world's first robotic correctional officer. Developed in South Korea, Robo-guard is equipped with 3D cameras that let it observe inmates, while special software looks out for changes in behavior. Should anything suspicious be detected, he'll raise the alarm. A lone wolf, he works his beat autonomously, but can also be controlled manually via an iPad, if human colleagues want to check what's going down. Initial field trials are under way right now, and if all goes well, he'll earn a place in more prisons. Who knows, he may even make deputy one day.