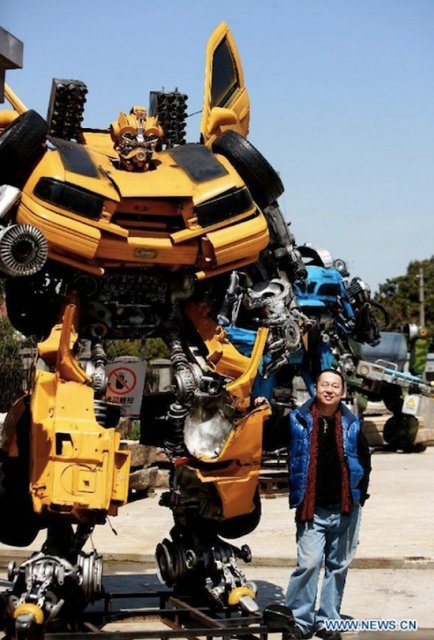 Some of the metal sculptures in the Mr. Iron Robot theme park are over ten feet tall — and so what if they aren't official Transformers?! These robots made out of scrapped cars and machine tools would definitely do in a pinch.

We know there are other scrap metal Transformers out there. But this story is about the ten-year labor of love that saw a simple metal sculpture business blossom into 600 giant robots that now rule their own theme park in Jiazing City in the Zheijang Province of China.

Chinese artist Kefeng Zhu expanded his vision of robots made from recycling to the next level by distributing large recycling bins to collect the amounts of iron and steel he needed to build on a bigger scale.

The community responded with enough material to enable Zhu and a team of artists to upgrade to an abandoned 225-hectare factory. As they gradually turned out more and more of these impressive metal giants, Zhu began to build the theme park in 2010.

Zhu's dream paid off. As of March 20, 2012 the Mr. Iron Robot theme park was granted official status as a Chinese tourist attraction.

While the overall experience of the theme park is clearly the "wow-factor" of these amazing creations, the undercurrent is a message of recycling. The fact that the giant robots are reborn from spare parts is pretty unmistakable.

Zhu has also included a gallery on human civilization from the Stone Age to the present day, perhaps to underscore how the human footprint on this planet has changed over time.

It's certainly not your average theme park, but from an artistic wizard like this you wouldn't expect it. Fortunately, it seems a lot of others agree!